42% of Smartphone Users in the USA Own iPhone

According to a research firm NDP, more than 40% of all smartphone users in the USA own an iPhone. This is a significant improvement from Q4 2012 figure, which was 35%. Samsung’s Android devices become more and more popular, so the South Korean manufacturer comes on its usual second place. As to the other companies, namely, Motorola, LG, HTC and Blackberry, their share on the market continues to drop. 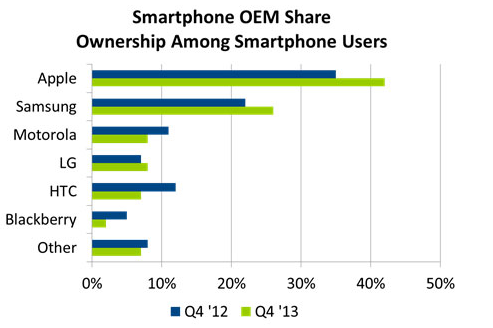 Here’s what the NDP analysts write:

Such results once again prove that American market is the most profitable for the company from Cupertino.