Adults and children prefer iPad to other devices 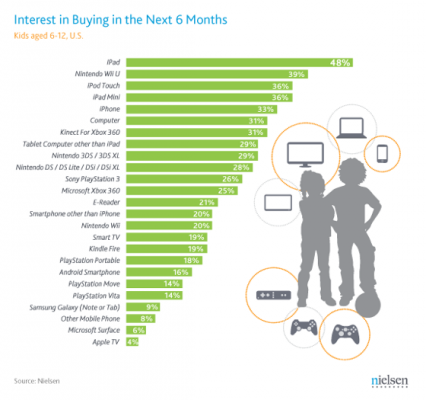 According to a research conducted by Nielsen in the United States, over the course of the next 6 months, consumers between the age of 6 to 12 years are interested in buying iOS products form Apple. New Nintendo Wii U took the second place on popularity, but rated behind the iPad. However, iPod Touch, iPhone and iPad Mini entered the top 5 most popular products for this age group.

"Approximately half the children surveyed expressed interest in the full-sized iPad (up from 44% last year), and 36 percent in the new iPad Mini. The iPod Touch and iPhone are also coveted devices among these young consumers (36% and 33%, respectively). Kids are also likely to ask for dedicated gaming hardware this holiday, with 39 percent excited to own Nintendo’s just-released console offering, Wii U, and 29 percent indicating they want a device from that company’s portable DS family. Microsoft’s Xbox 360 and Sony’s PlayStation 3 also proved appealing, with approximately one-quarter of kids 6-12 saying they want these high definition consoles."

Nielsen also conducted a survey among people over the age of 13 years and found that the iPad also took the top of the list. The rest of the respondents, aged 13 years and older, was less interested in Apple products than the 6-12 year old group.

In a separate poll (presumably) adults, Reuters found that one-third of the U.S. consumers were thinking about buying a tablet computer this holiday season. Among those who wanted to buy a tablet computer, the iPad had become the most popular with 25%. The second and the third places were taken by tablet computers: Kindle (15%) and Samsung (15%) respectively. The new iPad mini from Apple got 8 percent of the votes among the respondents.