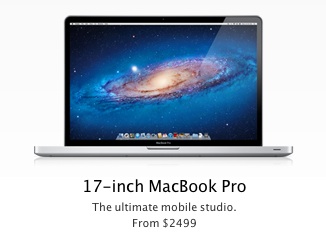 Ming-Chi Kuo, research analyst from KGI Securities, has issued a new report saying that Apple may discontinue the 17-inch MacBook Pro due to weak sales.

Also he expects that Apple will introduce new MacBook models that will combine power of the MacBook Pro and portability of MacBook Air models and dropping of 17-inch model will be part of this revamp.

“Apple’s Mac business in 2Q12 will be boosted by several factors. Three of which are: (1) Mountain Lion, which integrates iOS features with Mac OS, Apple TV’s interaction function, will be launched in June; (2) upgrading to Ivy Bridge; and (3) back-to-school demand. We forecast Apple will sell 5.32mn units of the Mac series (up 28.5% QoQ and 35.2% YoY) in 2Q12, making it the main growth driver.

While adding new products, Apple is likely to stop making the 17” MacBook Pro this year due to falling shipments, in order to maintain a lean product line strategy”.