« Apple TV 2G Will Be Supported By Upcoming Jailbreak
iOS 6.1 Jailbreak to Support All 22 Device Variations » 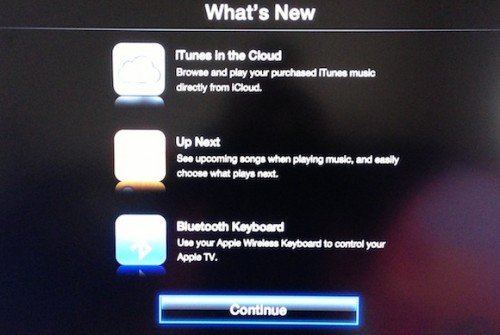 In addition to IOS 6.1, today Apple released an updated software for the Apple TV. The new 5.2 version contains a number of improvements, including:

- iTunes in the Cloud: Browse and play your purchased iTunes music directly from iCloud.
- Bluetooth keyboard: Use your Apple Wireless Keyboard to control your Apple TV.

- Up Next: See upcoming songs when playing music, and easily choose what plays next

- AirPlay audio for videos: Send stereo audio from movies, TV shows, and other videos on Apple TV to AirPlay-enabled speakers and devices (including AirPort Express and other Apple TVs).

It is interesting that Apple has issued three different updates for the Apple TV, covering not only AppleTV3,1 and Apple TV2,1 models, but also a new version codenamed AppleTV3,2. It is unknown yet what the difference is between these versions, but the numbering scheme indicates that there is a minor change.

Sources also noted that Apple refers to the new model of Apple TV with a code name J33I, while the third-generation model is codenamed J33. There is no direct evidence, but it is possible that the "I" just refers to an international version of the current box.

« Apple TV 2G Will Be Supported By Upcoming Jailbreak
iOS 6.1 Jailbreak to Support All 22 Device Variations »