Apple has just released iOS 9.1 to users worldwide. The release comes about a month after the release of iOS 9, which could boast of a wide number of under-the-hood improvements, bug fixes and new features for the iPhone 6s and iPhone 6s Plus, iPad mini 4 and iPad Pro as well as for other compatible devices.

iOS 9.1 brings over 150 new emojis to Apple devices and contains improvements for Live Photos that make it easier to capture beautiful images using the iPhone 6s or 6s Plus. 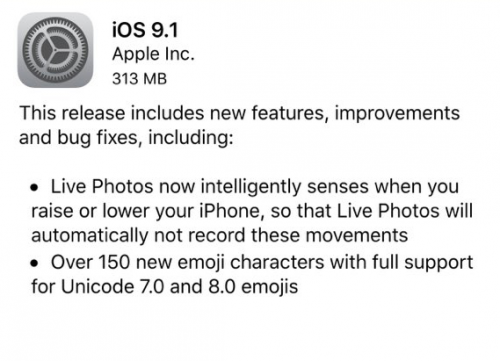 The most important thing about the latest update is connected with Pangu jailbreak. Apple has patched several vulnerabilities used to hack devices running iOS 9-9.0.2, so if you have a jailbroken iPhone, iPad or iPod touch with iOS 9 or later on board, you should stay away from iOS 9.1 as you will lose your jailbreak. Currently, it is still possible to restore your device from iOS 9.1 to iOS 9.0.2, however, Apple will soon stop signing iOS 9.0.2 making it impossible to go back to the earlier jailbreakable version of iOS.

Apple has listed the Pangu Team as the discoverers of two iOS 9 vulnerabilities and this is an additional indication of inability to hack iOS 9.1 using the current Pangu tool for untethered jailbreak.