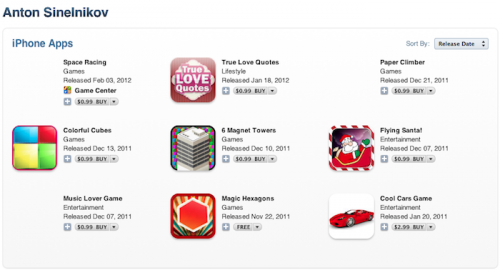 TechCrunch reports that Apple removed from the App Store a number of copycat applications such as Temple Run, Tiny Wings and Words with Friends that closely mimicked the titles of successful games after they provoked a public outcry from developers over the issue. The fraudulent apps were largely the work of developer Anton Sinelnikov.

Sinelnikov, however, is not alone in his efforts, as dozens of other applications from other developers have attempted to dishonestly capitalize on the successes of others. Numerous developers and users asked Apple to take down the offending apps. Keith Shepherd, the creator of Temple Run, noted on his account that an app like Temple Jump "taints the integrity of the App Store." After Apple pulled the app, Shepherd posted on Twitter that he was "thankful."

Apple has dealt with this issue before and has even faced criticism for being overly proactive in removing apps that are perceived as knock-offs. Last month, one developer accused game maker Atari of leveraging a "special relationship" with Apple to have as many as "hundreds" of applications resembling its own games taken down. Google's Android platform also faces similar problems, especially given the lack of an official review process on the official Android Market. The open nature of Android has even led to criticism by some content owners, developers and security firms over potential copyright infringement and malware concerns.