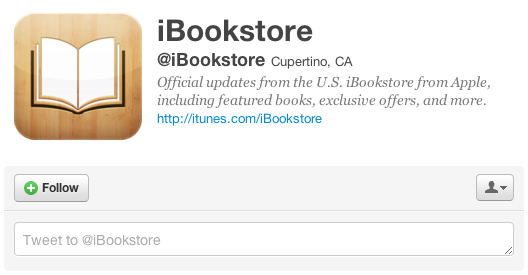 Apple has started promotion of its iBookstore on Twitter by launching a new account in this social network to keep followers informed on special offers, new releases and other changes in the store. Apple has actually created account in June, but the company has just today started sending out Tweets.

"Welcome to the Apple #iBookstore on Twitter. Follow us to discover new releases, exclusive book offers, and more".

The Apple’s second Tweet promotes by Erin Morgenstern, which is now actively promoted by the company. Currently Apple is featuring this book on the main page of iBookstore. Starbucks  has also joined the promotion by offering an "extended sample" of this book for free through its program “Pick of the Week” .

Also Apple is expanded its ties with this social network in other places, having allowed for Facebook and Twitter posting on its online store and added Twitter integration to the upcoming iOS 5.