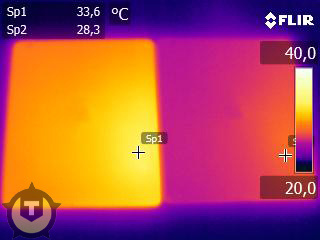 Thermal imaging of the third-generation iPad and the iPad 2 demonstrates that the recently released iPad running 10 degrees (Fahrenheit) hotter than its predecessor.

Dutch site Tweakers.net performed the GLBenchmark test on the two generations of iPads for five minutes to measure a heat difference. Using an infrared camera, the publication discovered that the hottest part of the new iPad was 33.6 degrees Celsius (92.5 Fahrenheit), while the iPad 2 measured 28.3 degrees Celsius (83 Fahrenheit).

Though the new iPad does appear to run warmer than the iPad 2, it should be noted that the temperatures are still well within Apple's specified operating temperature of 32 to 95 degrees Fahrenheit (0 to 35 Celsius).

The likely part in the third-generation iPad that may cause for the added heat is the new GPU.  As far s you know, the new iPad has an A5X chip with quad-core graphics from the PowerVR SGX543MP4. Moreover, the recent teardown of the new Apple’s tablet revealed a new metal heat spreader affixed on top of the A5X.