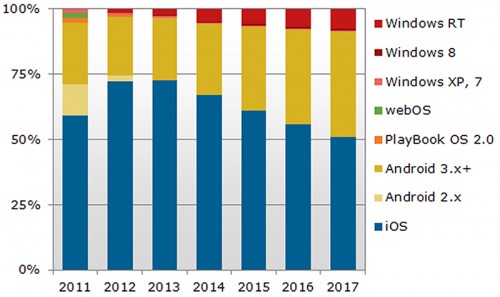 NPD, market research firm, suggests that Apple’s tablet market share will drop to just over 50 percent by 2017. Android and Windows-based devices will, obviously, have a hand in it, and, as NPD expects, will begin continue to eat into the iPad's overwhelming lead by 2014.

“So far in this relatively young product category, the tablet PC market has been dominated by Apple and has tended to include a number of competing products that are similarly configured to the iPad,” said NPD DisplaySearch Senior Analyst Richard Shim. “However, as the market matures and competitors become better attuned to consumer preferences and find opportunities to break new ground, we expect the landscape to change dramatically, giving consumers more choices, which will drive demand for more devices.”