« Vanity Fair in your iPhone
Sim cards can be easily hacked »

The new data presented in June by Consumer Intelligence Research state that Apple's iPhone 5 sales account for 52% of the company's smartphone sales. The figure of iPhone 4S corresponds to 30% of the sales while the one of iPhone 4 only reaches 18%.

The sales Phone 5 seem to be occupying more than half of all iPhone sales, figures registered nine months after the   launch of newcomer. Whereas the earlier model, iPhone 4S, accounts for almost three-quarters of iPhone sales nearly a year after its launch. Last but not the least, iPhone 4S had 90 percent of all iPhone sales in the immediate after-launch  period , compared to about 70 percent for iPhone 5. 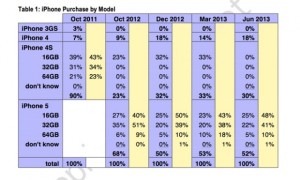 CIRP's data also discovered that more than half of iPhone buyers in June were upgrading from another platform (Android, Windows Phone, etc) or were buying their first smartphone.

« Vanity Fair in your iPhone
Sim cards can be easily hacked »