Leaked Schematics for the iPad 5 Reveal Its New Dimensions

As you can see in the photos below the thickness is expressly stated as 7.9mm. Unfortunately, the other photo is less clear; however, Nowhereelse compared it to previous schematic plans for the iPad and calculated a width of 178.5mm and a height of 232mm. That's a reduction of 1.5mm in thickness, 9.3 mm in length, and 7.3mm in width.

Unfortunately for us, this photo was captured in readiness, nose and beard team leaders that employee does not allow us to distinguish between multiple figures included in this document with the exception of one of them. Another shot (CF photo introduction to this article) shows us that the shell of the iPad 5 would measure 7.9mm thick. From there, so I tried to estimate the approximate size of 5 and the iPad it based on the schematic plans of the iPad 4 and iPad Mini provided by Apple. If my calculations are correct, the iPad 5 would measure around 232mm long and wide against 178.5mm 241.3mm 185.8mm long and wide for the iPad 4.

Apple is expected to unveil its new iPad 5 in autumn, before the holiday season. Check out the photos below: 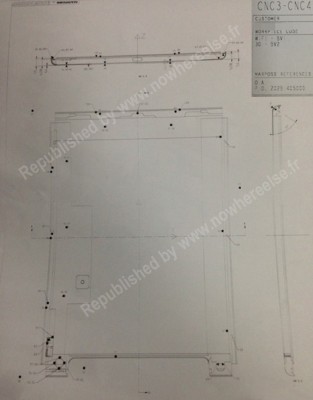