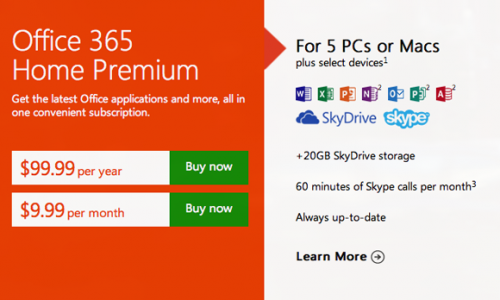 Microsoft announced the launch of Office software updates to devices based on Windows to new 2013 version as well as start of a new Office 365 subscription option.

Although the Office 365 option that costs 99 dollars a year allows installation on up to five computers, Mac users still use Office 2011 applications until an updated version of Office for Mac start to be available. Office 365 Home Premium is available in 162 markets in 21 languages and includes the following:

The cost of Office 365 Home Premium is $9.99 a month or $99 a year. College and university students, faculty and staff can acquire Office 365 University for $79,99 with four-year subscription.