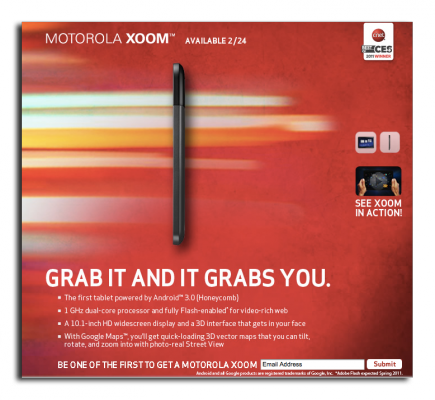 A new ad of Motorola's upcoming tablet Xoom on the website of Verizon Wireless shows that the device has 1 GHz dual-core processor that is "fully Flash-enabled for video-rich web". But as you can see on the screenshot above, there is a note, which shows that actually Adobe Flash is expected in Spring 2011.

Motorola unveiled its new tablet on the Consumer Electronics Show in January, and it was reported that the device will appear this week with Google's Android 3.0 Honeycomb. Now it looks like the latest version of Google's OS is still not ready for Flash. However, this is not a first time when Adobe delays the launch of its technology for Android devices, and this was even mentioned by Steve Jobs in his last-year letter about Flash:

However, Motorola is not the only company who advertises Flash support in its upcoming tablets. Last month Toshiba also launched a site for its new tablet, and it is based on Flash, which makes it impossible for iPad and iPhone visitors to access it. They can only see this message:

"Such a shame. Add this to the list of interesting places on the internet you can't see on your device. Of course, if you had a Toshiba Tablet you would enjoy the entire internet. Yep, Flash sites too."

Motorola Xoom will be unveiled this Thursday with a price of 800$ for the version with 3G support and 32 GB of memory. Wi-Fi version will cost 600$.