New iMacs Can Only Use Apple’s Hard Drives 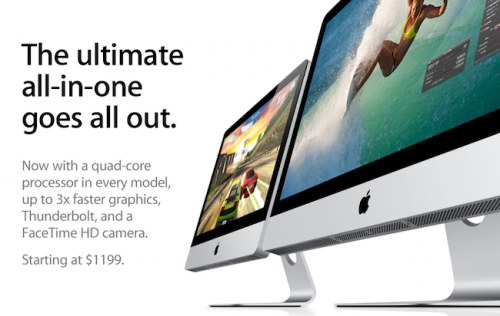 The new 2011 iMacs — the ones with Thunderbolt, Sandy Bridge processors and better graphics — don’t allow you to use any other hard drive but Apple’s custom ones, which are running a custom firmware to provide temperature monitoring through a new 7-pin SATA connector.

For the main 3.5″ SATA hard drive bay in the new 2011 machines, Apple has altered the SATA power connector itself from a standard 4-pin power configuration to a 7-pin configuration. Hard drive temperature control is regulated by a combination of this cable and Apple proprietary firmware on the hard drive itself. From our testing, we’ve found that removing this drive from the system, or even from that bay itself, causes the machine’s hard drive fans to spin at maximum speed and replacing the drive with any non-Apple original drive will result in the iMac failing the Apple Hardware Test (AHT).

So, Apple’s being evil in not allowing geeks and users to upgrade their iMacs to better configurations. When you purchase an iMac you’re signing up for the all-in-one idea of a machine that provides Apple’s latest and greatest innovations in desktop miniaturization technology — by using custom cables, firmwares and hard drives, Apple makes sure you get the best performances out of your iMac, with the “downside” of being unable to customize it. This aspect, of course, can also be seen a way for Apple to make sure that angry modders don’t queue up in the Apple Store asking for free replacements when they purposely opened an iMac to play around with its internals.