A new high-resolution photo showing the alleged iPhone 7 back panel has recently appeared on the Internet. The leaked image lets us take a closer look at the redesigned antenna bands and larger camera cutout. To be honest, the photo is similar if not identical to all previous photos we have seen over the last couple of weeks, but it lacks the certification information and the iPhone branding, which appear only on those components that enter the actual production. 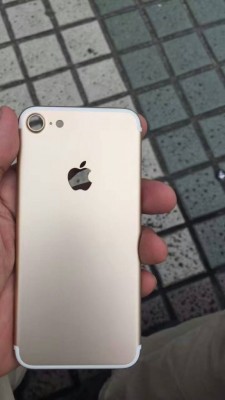 So far, we have seen many images depicting the rear panel. However, the design of the front side of the iPhone 7 remains pretty much unknown. Some insiders believe Apple may embed the Home button right into the display and make it touch-sensitive. Moreover, it may be capable of providing haptic feedback. Anyway, these are only rumors.

Apple is expected to unveil the new iPhone 7 together with its larger sibling the iPhone 7 Plus in September. The devices may get new back panels, Home buttons, better cameras and lack the headphone jack. There should be some other enhancements as well like faster processors, possibly more RAM and 32GB of base storage.