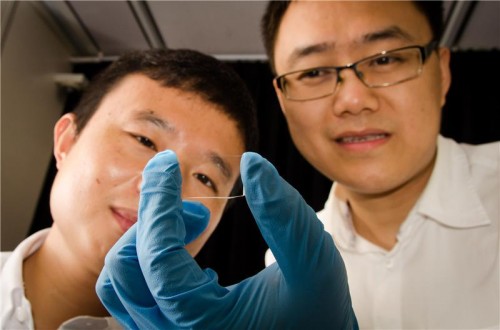 Engineers at Nanyang Technological University have developed a revolutionary new camera sensor that is a thousand times more sensitive than the ones currently on the market, reports Science Daily. The sensor is made from graphene and is apparently the first that can detect broad spectrum light from the visible to mid-infrared with high photoresponse or sensitivity.

Graphene is a million times smaller than the thickest human hair (only one-atom thick) and is made of pure carbon atoms arranged in a honeycomb structure. It is known to have a high electrical conductivity among other properties such as durability and flexibility.

Notably, the sensor is also very energy efficient. It uses 10 times less energy than current sensors. Additionally, when mass produced, the graphene sensor is estimated to cost 5 times less than the current ones do.

The graphene sensor's inventor, Assistant Professor Wang Qijie, says "We have shown that it is now possible to create cheap, sensitive and flexible photo sensors from graphene alone. We expect our innovation will have great impact not only on the consumer imaging industry, but also in satellite imaging and communication industries, as well as the mid-infrared applications."

Qijie also notes that manufacturers will not have to change the process they use to produce sensors. They just need to change the base material.

"While designing this sensor, we have kept current manufacturing practices in mind. This means the industry can in principle continue producing camera sensors using the CMOS (complementary metal-oxide-semiconductor) process, which is the prevailing technology used by the majority of factories in the electronics industry. Therefore manufacturers can easily replace the current base material of photo sensors with our new nano-structured graphene material."