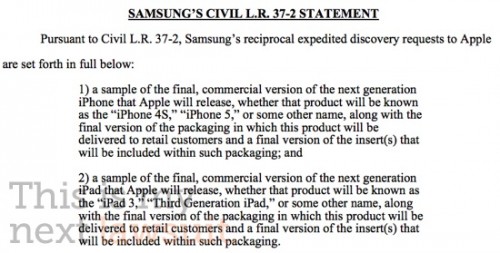 Samsung’s lawyers have asked Apple to hand over “final, commercial versions” of the next-generation iPhone and iPad and the retail packaging design of the devices. The company wants to evaluate if their future products, like the Droid Charge and the Galaxy Tab 10.1, could have similar features with them. This countersuit was filed after Samsung was asked to hand over Apple its prototypes of the Droid Charge, Galaxy Tab 8.9, Galaxy Tab 10.1, Infuse 4G and Galaxy S 2. In order to avoid future confusion with the Apple’s products, Samsung is asking the court to apply the same procedure that granted Apple’s lawyers access to Samsung’s upcoming products.

Samsung’s asking for a court order requiring Apple to produce “the final, commercial versions” of the next-generation iPhone and iPad and their respective packaging by June 13, 2011, so it can evaluate whether there’ll be confusion between Samsung and Apple’s future products. If the final versions aren’t available, Samsung wants “the most current version of each to be produced instead. Samsung says “fundamental fairness” requires Apple to give up its future products, since Samsung had to do the same.