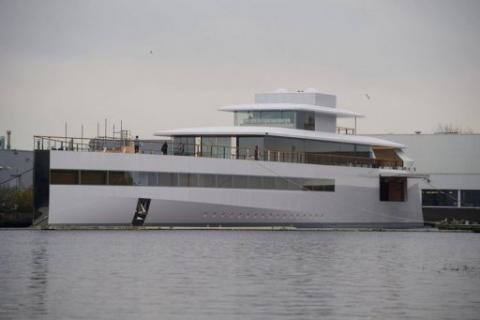 Last Friday, it was noted that the Jobs family's new yacht had been confiscated by the authorities of the Netherlands as a result of the dispute over design payment in favor of the famous French designer Philippe Starck. Stark asserted that he should have received the payment in the amount of 9 million euros for designing yacht, however the Jobs family reported that agreed rate was equal to 6% of the yacht valued in the 105 million euros. Stark said that his fee will be lower by about 3 million euro.

"The Venus is no longer impounded, we have found a solution," Gerard Moussault, a Hague-based lawyer for the Jobs estate, told AFP.

"A security deposit was paid into a bank account, but I cannot say for how much," Moussault said after French designer Starck last week asked Amsterdam bailiffs to seize the sleek 70-metre (230-foot) yacht."
AFP now reports that the yacht was released after Jobs family has made a deposit to a bank account.

The yacht remains in the harbor of Amsterdam due to bad weather conditions. As noted in the report, transport by ship is planned in yachts United States to transfer Jobs family at an unspecified date.