« Apple Releases iOS 6.1 Beta 5 to Developers
Some of 21 and 27-inch iMac models began to be realized through Apple's retail partners »

Steve Wozniak is dissatisfied with the biographical movie "jOBS" 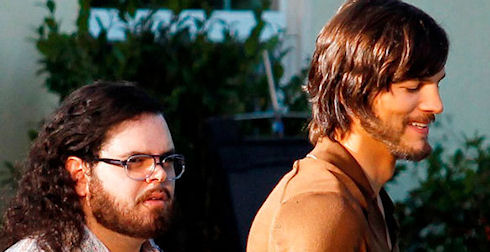 Apple co-founder Steve Wozniak said Jobs would have been "offended and embarrassed" to see Ashton Kutcher in his role.

Wozniak's comments came after a short excerpt from the film, where Ashton Kutcher and Josh Gad play the roles of Jobs and Wozniak, respectively. The first scenes from the film co-founder of Apple met with sharp criticism in an interview on "Good morning America".

"As far as the personalities that were in that scene [laughs] this was just ridiculous. Like Steve Jobs as some sort of 'oh my gosh, I'm the father of society, I've got the ideas that are gonna drive the--' No, he didn't act like that at all."

Wozniak said that ”Jobs did not take the role of tech visionary until much later of his life.”

Wozniak publicly criticized the film in"good morning America" for the third time in two days. He commented on the first post from Gizmodo, which contained the video clip, saying that the creators of the film portrayed Wozniak and Jobs ' personalities "very wrong."

Later Wozniak said in an e-mail that he initially acknowledged the potential in democratizing technologies. Jobs, he said, was more interested in realizing the designs of Wozniak.

In the "Good morning America," Wozniak said that Jobs would have been "a little offended and embarrassed by it just like myself... I think he would say that was, you know, a little bit too phony."

Wozniak did not act as a consultant during the creation of the film. Instead, he was contracted to work on a competing film, which will be released later. Wozniak leaves open the possibility that the Kutcher film may still be good, commenting that he only looked one stage.

Another thing in the movie that appears to distort reality is wardrobe. Wozniak said: "I never wore a tie or looked like a professional and in that scene I kind of looked like, like a real professional."

« Apple Releases iOS 6.1 Beta 5 to Developers
Some of 21 and 27-inch iMac models began to be realized through Apple's retail partners »