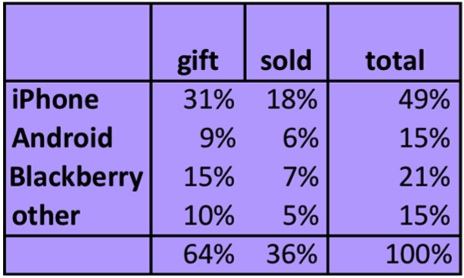 AllThingsD on a survey made by Consumer Intelligence Research Partners (CIRP) which analyzes the impact of the market for iPhones that are given away or resold when users buy the latest models. The survey looked at users upgrading to new iPhones beginning with the launch of iPhone 4S in October and found that 53% of those customers had returned their used iPhones to the secondary market.

The research found that of those used phones returned to the secondary market, 49% were old iPhones, while 15% were Android smartphones and 21% were BlackBerry devices. About two-thirds of those smartphones put back on the market were given away and the remaining devices were sold.

According to the research, 87% of users who gave away or sold their used iPhones expected the new owner to activate them for using, and CIRP estimates that such activations represent 11% of all iPhone activtions since iPhone 4S launch.

“The research firm believes that, for every used iPhone that carriers activate, they save around $400. In the fourth quarter of 2011 alone, CIRP figures that secondary-market activations saved AT&T and Verizon between $400 million and $800 million in subsidy costs”.

And while the active market for old iPhones may seem to be detrimenatal to Apple as those users purchase a used smartphone without offering revenue for Apple, CIRP notes that those low-priced old iPhones are a common way to attract new customers to the iPhone ecosystem.

“It hurts Apple because it creates competition for new iPhones, which we see in the relatively modest sales of reduced-price iPhone 4 and free iPhone 3G units. But it also benefits the company because used iPhone customers aspire to own the newest and best iPhone, so they are likely future new phone customers. In fact, they are likely new entrants to the Apple ecosystem, who otherwise would not have found a way in”.

Besides increasing future device sales, the market for used iPhones also expands the user base and market for iTunes Store content.