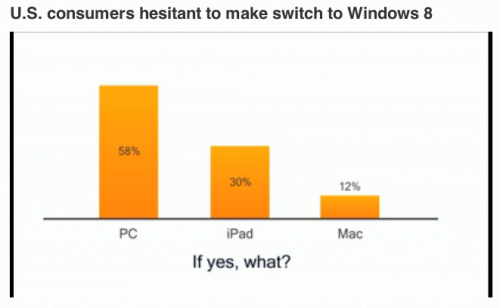 Internet software company conducted a survey of Windows users to find out how many people plan to upgrade to the latest version of the Windows and got some surprising results.

As USAToday , the survey polled 1.6 million users of Avast anti-virus software on October, 25, the day before Windows 8 was released, and got 350,000 responses, from which 135,329 were from U.S Windows users. The survey showed that about half of Windows users are going to switch to an Apple’s product instead of upgrade to Windows 8.

“Many households already have multiple PCs, and people are keeping their computers longer. More people are going to the iPad as their second or third computing device.”