The update of Apple TV with Bluetooth keyboard support is expected 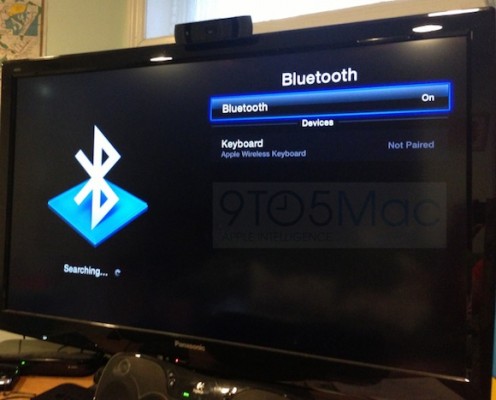 Last year, it was revealed that Apple has been working on a proposal for a Bluetooth keyboard that compartible with the 2nd generation Apple TV.

"The ability to pair a Bluetooth keyboard with the Apple TV would obviously make for significantly easier text entry, simplifying such tasks as initial setup with iTunes Store accounts and Wi-Fi network passwords as well as day-to-day content searching."

9to5mac reports that Apple seems to integrate the Bluetooth function in Apple TV, as the latest beta for developer now allows to pair the Bluetooth keyboard with the second or third generation Apple TV .

After connecting a Bluetooth keyboard to Apple TV, it will be possible to control it completely without using the remote control or iOS device. The arrow keys are used for navigation, the return key is used to play or pause and escape key acts as a menu or up "one level" button. And, of course, searching becomes easier with full hardware keyboard.

Upgrade allows a user to use Bluetooth keyboards, so pairing Bluetooth speakers, mice or even Macs, will be impossible. 9to5mac noted that it managed to connect the keyboard Logitech Bluetooth to Apple TV succesfully, so updating is not limited to keyboards from Apple.

Although, now the functionality is limited to the standard keyboard, it is believed that ultimately, Apple may install Bluetooth support  for voice remote control or iOS device to use Siri with Apple TV.