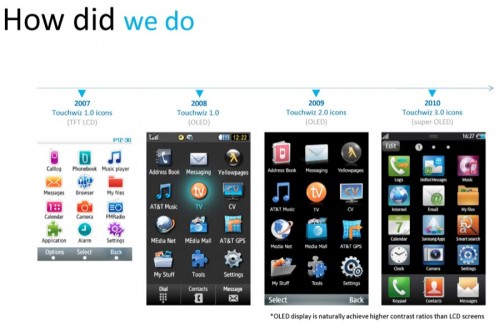 A senior designer at Samsung, Jeeyuen Wang, took the stand on Tuesday in an effort to counter Apple's allegations that multiple Samsung devices copied the layout and imagery of iOS. The designer claims hundreds of people around the world worked tirelessly on Samsung's iconography, adding that she herself was only able to sleep two or three hours a night. Wang admitted that she did look at products from other companies, including Apple, but denied stealing the icons outright, saying instead that it was part of the design process.

"At the time, there was a wallpaper that was in the image of flowers for an AMOLED LCDs and everyone in our team kind of liked the image," Wang said. "We had come to a conclusion that we would adopt this image for the icon." Wang also said Samsung's phone app icon, referred to internally as a "dumbbell," was there before she began work on the project in 2002 and was green because the color had the connotation of "go."

Following Wang's testimony was Itay Sherman, avid inventor and CEO of multi-touch company DoubleTouch, who took the stand to argue against the validity of Apple's design patents. But Apple' lawyer brought Sherman's arguments into question, saying that he is an electrical engineer and not a designer.