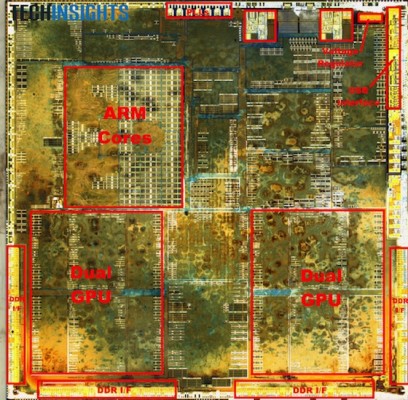 Thanks to various teardowns, we already know that the A5X system-on-a-chip is being manufactured by Samsung and is using the same 45-nm process used for the A5 package in earlier devices. Having stripped down the new iPad, UBM TechInsights found that the amount of area taken up by the quad-core graphics found in the A5X, a significant boost from the dual-core graphics found in the A5.

What should be noted is that the processor cores from ARM are identical in look but the extra real estate on the processors (the A5 measures at approx. 120 mm^2 vs. the A5X which measures at 163 mm^2) is accounted for by the the PowerVR SGX543MP4 GPU cores, of which they are paired in groups of two and then symmetrically opposed to each other.

In the A5X the graphics cores take up roughly 25% of surface area alone, compared to just 10% for the ARM cores that make up the application processor. UBM TechInsights also found that additional DDR interfaces and architecture to support the boost in graphics horsepower.