Android and iOS Continue To Dominate In US Smartphone Market 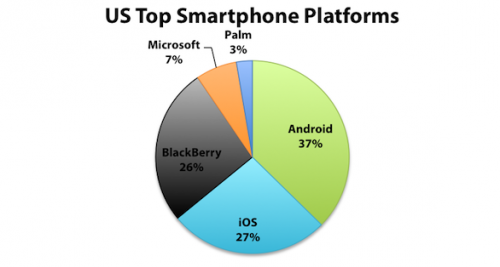 comScore has released the results of its April survey (comScore surveyed over 30,000 mobile phone subscribers.) of mobile phone usage in the United States. Surpassing Research in Motion, Apple took the solid second place among smartphone platforms and now iOS holds 26.0% of market. Google’s Android leads the pack with 36.4% of the market, an increase of 5.2 percentage points over the three month period. Research in Motion's BlackBerry operating system has slipped to 25.7%. When looking at mobile phone manufacturers overall, Apple is now the fourth largest vendor with a share of 8.3% of the US market. Samsung remains number one with 24.5% of the market, followed by LG and Motorola.