While iOS global market share and iPhone shipments continue to decline, Android devices continue to gain momentum. According to the latest report from Strategy Analytics, Android share reached nearly 88% in the third calendar quarter of 2016, leaving iOS with 12.1% far behind. 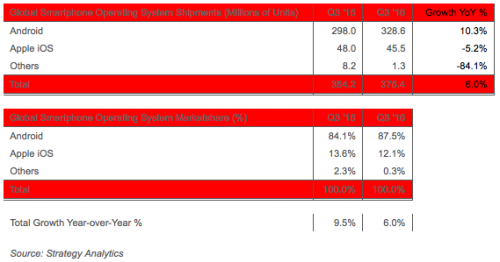 Android’s gain came at the expense of every major rival platform. Apple iOS lost ground to Android and dipped to 12 percent share worldwide in Q3 2016, due to a lackluster performance in China and Africa.

Apple sells only high-end devices whereas Google lets almost any company that produces smartphones utilize Android for both flagship and entry-level handsets. This is where such a big difference in numbers comes from.