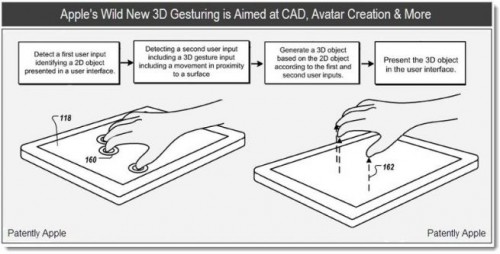 Besides Apple's patent application about multitouch gestures, USPTO has published another another patent concerning 3D gestures.

In another filing (number 20110164029) the company describes new three-dimensional gestures (showed in the illustration above) which might be used in professional content creation software, such as 3D modeling, CAD applications, image editing programs and many others. The 3D gestures could also be used in alleged iPhone HD to run such professional apps as Final Cut Pro and Aperture.

As Patently Apple , future displays of iOS devices will make it possible for users to create 3D objects and worlds by means of 3D gesturing.

“The new 3D gesturing will control color and textures while allowing users to uniquely rotate objects to gain different perspectives of their designs. This is wild stuff that is bound to give Apple’s competitors another huge headache”.

Apple filed both patents application in the 3 quarter of 2010, when the iPad was originally announced.