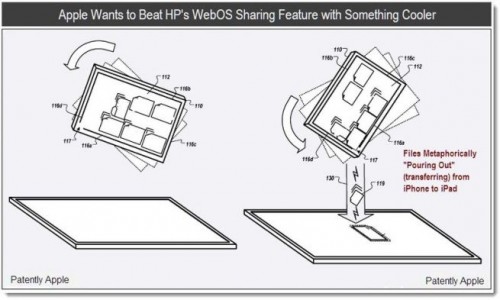 The system uses many sensors in user's device, namely magnetometer, gyroscope and accelerometer, for identifying physical location relative to other devices in close vicinity. Using visual representation of such physical phenomenon as repelling forces, the interface would inform user about when and how object can be transferred between devices.

Now Apple offers limited file sharing choice that require a computer, such as iTunes File Sharing, running a WebDAV server on the device and iTunes syncing to wirelessly transfer app files via a desktop browser. Besides, this fall Apple will launch new iOS APIs and free iCloud online service so that third-parties could offer their applications for sharing private files across devices through user’s iCloud storage. The new AirDrop component could finally be included in iOS to allow file sharing by means of drag-and-drop between Mac computers and iOS devices.

But all these methods cannot offer easy way to directly transfer files across devices in close vicinity. File sharing is also complicated with lack of full access to file system for end-users. The offered multitouch gestures based on physical metaphors could facilitate the file sharing process without exposing file system details to the user.

Patently Apple that one scenario is the initiation of file transfer session showed by document icons pouring between devices. Another one is flicking documents icons out of boundaries of the screen, and the angle of the flicking pointing to the target device (if there is more than one device in the vicinity).

The interface would show some clues such as audible feedback (tablet fizzing, gas through a valve, the sound of pouring water, a sci-fi teleporter, or other sound that represent the transfer of an object between two points) or animations including “gravity, friction or drag, momentums, torques, accelerations, centripetal forces or any other force found in a real-world physical environment”, Apple stated in the document. 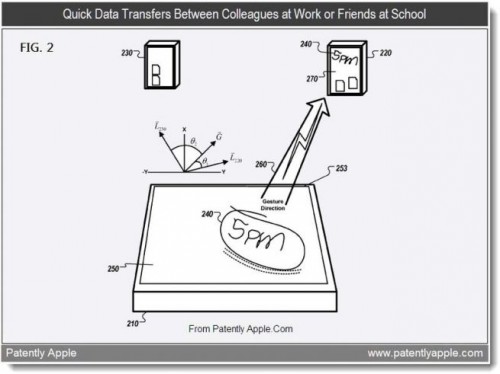 Apple filed this patent application in the third quarter of 2010, when the iPad was originally announced.

More detailed information about patent application you can get .