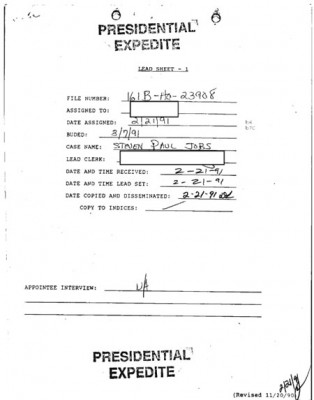 The U.S. Commerce Department has confirmed a FBI agent report who claiming that Apple co-founder Steve Jobs served on former President George H.W. Bush's Export Council during the 1990s. He was considered for appointment to the council in 1991.

The Export Council consists of unpaid members who meet a minimum of twice a year to advise the president on trade policy. Given that the Commerce Department said Jobs served during the first Bush administration, it would appear that he was on the council from 1991 to 1993.

The FBI file in question, a level III background investigation, was interesting to note because it included an unusually high number of derogatory comments for that type of investigation. The names of those interviewed had been redacted, but he was described as being "deceptive" and someone of "questionable" moral character. One interviewee recommended Jobs for the "high level political position" in spite of assertions that he was deceptive because "honesty and integrity are not required qualities to hold such a position." "Mr. Jobs has integrity as long as he gets his way," another person said.

The documents also revealed that Apple was subject to a bomb threat in February 1985. An unnamed caller claimed to have placed explosives in certain individuals' homes and demanded a million dollars to not detonate them. The case was eventually closed in August 1985.