As it turns out, the demand for the iPhone 7 and older models is still strong. According to a research firm Flurry Analytics, most of the smartphones purchased and activated during the holidays were iPhones. 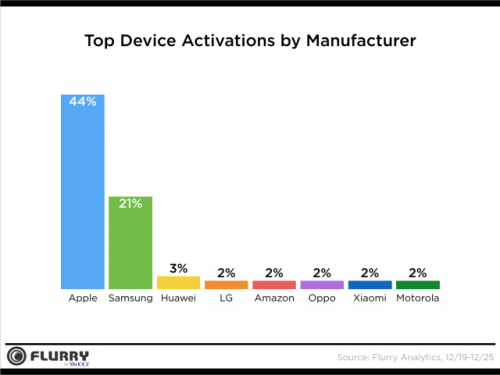 As we do every year, Flurry took a look at the most gifted smartphones and tablets this holiday season, examining phone and app activation throughout the week leading up to Christmas day and the start of Chanukah.

In fact, 44% of all phones activated during Christmas holidays were iPhones. Apple’s main rival, Samsung, occupied the second spot of Flurry’s Top Device Activations list with 21% of device activations. Huawei and LG took the third and fourth places with 3% and 2% respectively.

Strangely enough, Google’s Pixel and Pixel XL are missing from the list, indicating that the manufacturer failed to promote the devices effectively. Hopefully, the company will lure new customers in 2017.