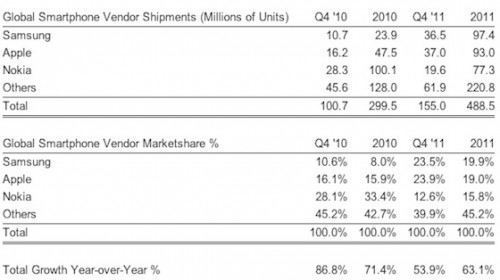 A couple of days ago the research firm Strategy Analytics announced its estimates of the global smartphone market for the fourth quarter of 2011. The firm has found that Apple narrowly squeezed by Samsung to retake the title of world's largest smartphone vendor as measured by unit shipments. Apple's 37 million iPhones narrowly eclipsed Samsung's quarterly smartphone shipments of 36.5 million units.

Neil Mawston, Executive Director at Strategy Analytics, added, “While Apple took the top spot in smartphones on a quarterly basis, Samsung became the market leader in annual terms for the first time with 20 percent global share during 2011. With global smartphone shipments nearing half a billion units in 2011, Samsung is now well positioned alongside Apple in a two-horse race at the forefront of one of the world’s largest and most valuable consumer electronics markets.”

In the second quarter of 2011 Apple passed Nokia and is holding off Samsung now. But in the third quarter Samsung easily passed Apple, and Samsung’s continued growth paired with a pause in iPhone sales ahead of the iPhone 4S launch. The iPhone 4S launch could help Apple to retake the lead from Samsung in the fourth quarter, although it was not able to top the charts for full-year 2011.