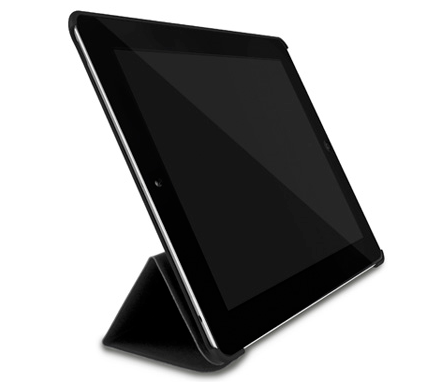 iLounge , citing "repeatedly reliable source" , that Apple is working on a new Smart Cover-like case for iPad 3. While the Smart Cover is said to still work with the upcoming iPad, the company is reportedly working on a new iPad 3 case with a front panel similar to Smart Cover and a rear shell ensuring the protection for the entire device.

“Said to be similar to Incase’s Magazine Jacket (and a host of subsequent alternatives that have appeared for the iPad 2), this new case has a folding magnetized Smart Cover on the front, and a rear shell made from fiberglass covered with PU/bicast leather”.

The iLounge says that it is unclear whether this case will be compatible only with the iPad 3 or it will also work with the iPad 2.

Besides the new case for iPad 3, the report also claims that Apple is planning to use a ceramic material or glass for the rear part of the iPhone 5, denying rumors of company moving back to a metal rear case. By utilizing thinner Corning’s Gorilla Glass 2, the company will reportedly be able to design even thinner iPhone.

The source also notes that larger display in the next iPhone remains a possibility and that Apple may also replace the 30-pin dock connector with something more compact.