Apple on Wednesday released iOS 8 to users worldwide. As it was expected, the new mobile operating system brings lots of improvements and bug fixes. Apart from that, it is far more secured and efficient and can boast lots of new features. The most noticeable among them are the widely-rumored Health app, QuickType, the support of third-party keyboards, updated Mail, Photos, Camera and Safari and the apps like Continuity, Handoff, AirDrop, Instant Hotspot, which were previously unavailable for users. 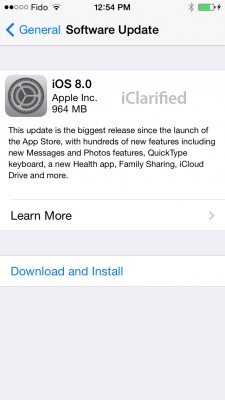 iOS 8 delivers a simpler, faster and more intuitive user experience with new Messages and Photos features, predictive typing for Apple’s QuickType keyboard and Family Sharing. iOS 8 also includes the new Health app, giving you a clear overview of your health and fitness data and iCloud Drive, so you can store files and access them from anywhere.

For more details about the latest iOS version, go to Apple’s official website. The update is available via Software Update, but those who use jailbroken devices and want to save their jailbreak should stay away from iOS 8. Keep this in mind.