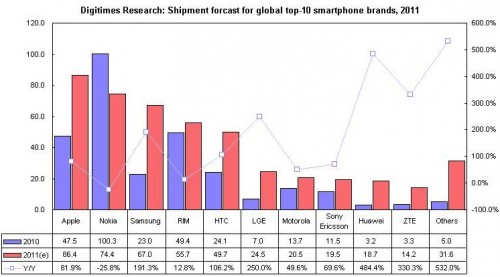 We already reported that in the second quarter of 2011 Apple had passed Nokia as the world's largest smartphone vendor as measured by shipments. But Nokia still excelled Apple in sales to end user. Digitimes Research now projects that Apple will be a top smartphone vendor of 2011 with nearly 19% of the market at 86.4 million units.

Apple is expected to overtake Nokia as the top ranking vendor in terms of shipment volume in 2011, while Huawei Technologies will enjoy robust growth in shipments enabling the China-based company to close its gap with Sony Ericsson and Motorola.