Apple on Monday released iOS 10.1.1 with a fix for the issue making it impossible to view the Health app data for some users. The release of the updated firmware version comes about a week after the release of iOS 10.1 that contained some minor improvements as well. 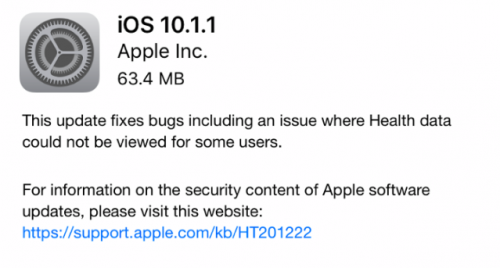 This update fixes bugs including an issue where Health data could not be viewed for some users.

To read more about the security content of the update, please visit this Apple webpage.

Along with the latest public version of iOS 10, Apple has also seeded the first iOS 10.2 beta to developers for testing. The update has a build number 14C5062e and contains new emojis, wallpapers, enhancements for Photos and Messages as well as a new Video widget. There’s also a new playlist sorting option in the Music app.

If you have a compatible iPhone, iPad or iPod touch, you can download any of the two firmware versions right now. Keep in mind, though, that the latest beta may be unstable and requires a developer account to be installed and tested.

Before the update, don’t forget to back up your device to ensure you don’t lose important data in case something goes wrong.