Apple has recently released iOS 8.1.3 with a wide number of stability and performance improvements and bug fixes. The update is recommended for all iOS 8 users and it comes about two weeks after the release of the latest iOS 8.1.3 beta. 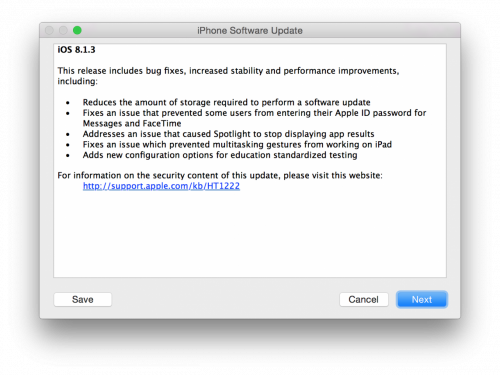 Unlike all the previous betas, the final version of iOS 8.1.3 is really worth upgrading to as it can boast of several important features. According to the release notes shared by the guys from Cupertino, iOS 8.1.3:

If you want to upgrade to iOS 8.1.3, you can do this right now using the Software Update option on your iPhone, iPad or compatible iPod touch. However, keep in mind that the latest version of iOS 8 may kill the TaiG jailbreak. The guys from Cupertino always try to patch the vulnerabilities used for jailbreak in new versions of their mobile operating system.