Apart from releasing OS X Yosemite 10.10.3 to users worldwide, the guys from Cupertino have recently released iOS 8.3. The latest version of Apple’s mobile operating system can boast of a number of stability and security improvements as well as some new features. In case you don’t remember, the very first iOS 8.3 beta was seeded to developers in February. 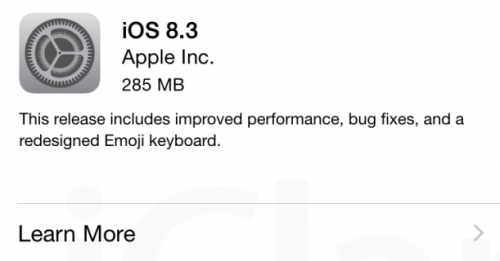 The latest version of iOS features the support of wireless CarPlay connectivity, Google’s two-step verification and UnionPay payments system in China. Siri now speaks several new languages and there are some improvements in the Messages app. Apart from that, there are some minor user interface changes, for example, slightly redesigned keyboard and new emojis.

If you have a compatible iPhone or iPad, you can download iOS 8.3 right now. Since it is a stable build, it is safe to install it on your main device.