Apple has recently released OS X Yosemite 10.10.3 to users worldwide. The release comes less than a week after the release of the seventh beta seeded to developers and public beta testers. The very first testing build of OS X 10.10.3 was released in February. 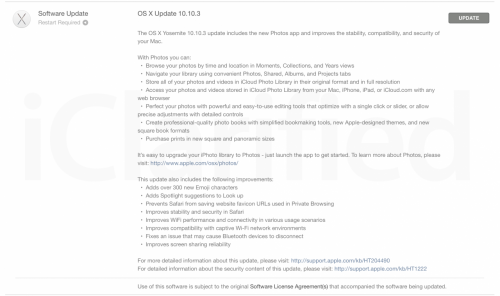 As you probably know, the most-recent version of Apple’s operating system for Mac computers can boast of new Photos app, which is a replacement for both Aperture and iPhoto apps. Apart from that, Yosemite now features a wide number of new emojis, the support of Google’s two step verification, improvements for Safari browser and a wide number of bug fixes. It should be noted that OS X Yosemite 10.10.3, unlike OS X Yosemite 10.10.2, has a lot of new interesting features and enhancements.

As usual, the new version of OS X is available via the Software Update section of the Mac App Store. Unlike the previous testing builds, this version is stable, so you can download and install it on your main device right now.