Apple on Thursday seeded the second OS X Mavericks 10.9.3 beta to registered developers for testing. The release comes just a week after the company from Cupertino unveiled the first OS X 10.9.3 beta. This version included a number of important bug fixes as well as improved 4K display compatibility for Macs. 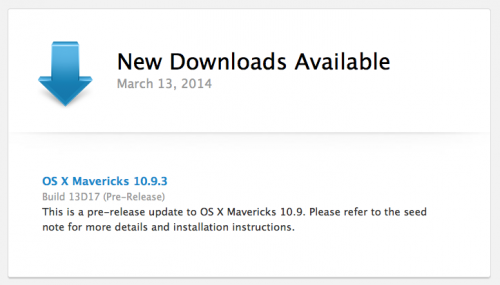 Whether the new beta contains something new is still a question. Here’s what writes:

There’s no word so far on what changes we should expect to see in the new version of Mavericks, but Apple has thus far asked developers to specifically focus on graphic drivers and audio in today’s beta.

OS X Mavericks 10.9.3 beta 2 has a build number 13D17. If you have a developer account, you may download the new OS X version either via Software Update or from Apple’s developer portal. Keep in mind that this is not the final version, so it may be unstable and contain some bugs.