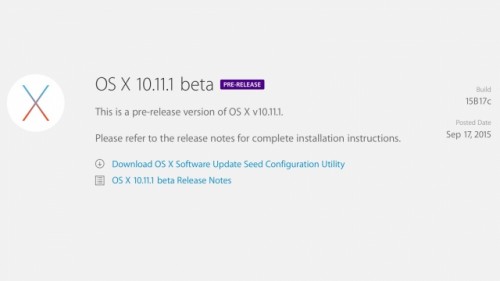 OS X El Capitan 10.11.1 has a build number 15B17c and contains a wide number of under-the-hood security, stability and performance improvements. Apart from the changes mentioned above, Apple engineers have fixed a number of minor bugs and added several new emojis and the support for Unicode 8. In general, the latest update looks quite similar to OS X 10.11 El Capitan GM.

If you have a developer account and a compatible Mac, you can download the first OS X 10.11.1 El Capitan beta right now. It is available either on Apple’s dev portal, or using the Software Update option of the Mac App Store. Keep in mind that this build may be quite unstable, so it is not recommended to install it on your main computer or laptop. Upgrade at your own risk.