Apple on Tuesday seeded the fourth iOS 9.1 beta to developers and the member of the public beta testing program. The release took place one week after the release of the previous iOS 9.1 beta and iOS 9.0.2 with fixes and minor tweaks. Just like previous betas, this one contains a number of stability, security and performance improvements. 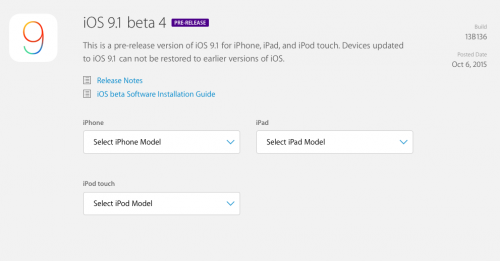 The fourth pre-release iOS 9.1 version has a build number 13B136. The latest beta contains compatibility updates for the devices that are expected to be released in the nearest future, namely, the 12.9-inch iPad Pro and the fourth-generation Apple TV. Apart from that, the most-recent iOS 9.1 build supports Unicode 8 and new emojis. Finally, Apple engineers have added a new option to the Settings app allowing users to disable photos for their Messages contacts.

If you have a developer account or the account of public beta tester, you can download and test the latest iOS 9.1 beta right now. it is available either like OTA-update or through Apple’s dev portal.

Aside from seeding iOS 9.1 beta 4 to testers, Apple has also seeded the third beta of tvOS to developers.