Apple has released the second beta of iOS 9.3.2 to developers. The latest update contains a number of bug fixes, stability improvements and security enhancement and should be installed only by those who need the software for testing purposes. It is not recommended to install the latest build on your main device as it can cause compatibility issues, crashes and freezes. 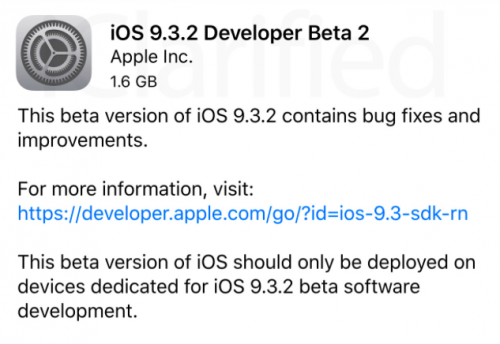 Apple hasn’t revealed what new features are included in iOS 9.3.2 Beta 2, so looks like we deal only with minor tweaks. Probably the only noticeable change is the ability to use the Low Power Mode together with Night Shift again.

If you have a registered developer account, you can download the latest pre-release iOS version from Apple’s developer portal or using the Software Update section of the Settings app right on your device.