New 12-inch MacBooks Are 15% to 18% Faster Than Predecessors

Earlier this week, Apple released updated 12-inch MacBook models. According to the latest Geekbench results shared by reliable insiders, the laptop with a 1.2GHz processor is about 15% to 18% faster than its predecessor. In the single-core test the laptop managed to earn 2,894 points and in the multi-core test the result was equal to 5,845 points. Apart from that, the new MacBook has a 41.4-watt-hour battery that helps it to work up to 9 hours on a single charge. 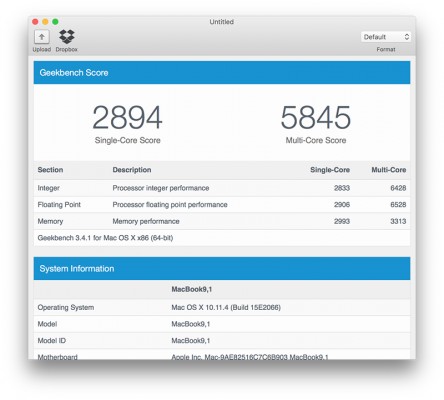 Meanwhile, early BlackMagic disk speed tests have seen write speeds that are up to 80 or 90 percent faster than the write speeds in the previous-generation MacBook. Read speeds are also improved.

12-inch MacBooks are targeted at those who need an ultra-portable device with decent battery and top performance. New device is a good alternative to the MacBook Air lineup.