Apple has released the second beta of iOS 10.2 to developers for testing. The update contains a number of minor bug fixes as well as security and stability enhancements. 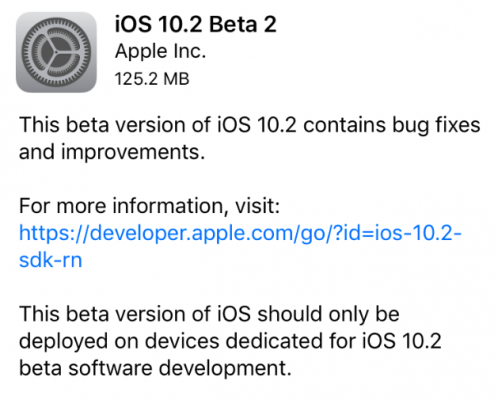 This beta version of iOS 10.2 contains bug fixes and improvements.

iOS 10.2 features a wide number of new emojis and iPhone wallpapers. Apart from that, it contains a new Video widget, enhancements for Camera, Messages, and Apple Music.

You can find additional information about iOS 10.2 Beta 2 on Apple Developer website.

If you have a developer account and a compatible iPhone, iPad or iPod touch, you can download and install the latest beta right now.

Keep in mind that you install the software at your own risk. Don’t forget to create a backup before installing the pre-release firmware on your device.