Apple television with 'iRing' accessory to launch this year 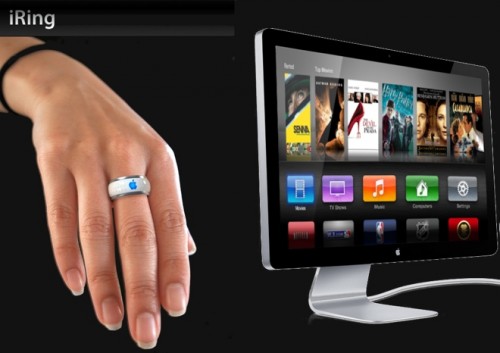 After meeting with Apple's suppliers in China, one analyst believes that Apple will release a TV with a new accessory that allows a user to control a TV using finger gestures.

The alleged details of the so-called "iTV" from Apple have been published in a research note by Brian White, received by AppleInsider. White believes that Apple will begin distributing television sets at the end of 2013, which, in turn, promises to revolutionize the field of television. "

The accessory "iRing" detailed by White is a new concept that was not previously documented in detail in other reports. The ring will act as a "navigational pointer" for television, and will allow the TV set to increase motion detection and replace some of the functions present in the remote control device.

White also believes that "iTV" will appear with a “mini iTV" screen that allows users to view content from the 60-inch “iTV” on the 9.7-inch display- the same size of screen as the full-sized version of the iPad. He believes that this additional display can also be used for home security, telephone calls, video conferencing and more.

"Essentially, we believe the 'mini iTV' screens will be able to capture content from the 60-inch 'iTV' across a distance of up to 200 meters, allowing a user to view 'iTV' content in the kitchen, washroom, garage, bedroom, backyard, etc.," White wrote. "We believe Apple will offer one 'mini iTV' per 'iTV,' but package options will include up to four screens (i.e., one screen is part of the standard package and pay extra for each additional."

Although this device with a small screen will have a similar form of iPad, it will be limited in functionality, and will not replace the iPad.

White also sees an opportunity to tie the Apple’s smart watch and the "iRing" accessory into the "iTV" ecosystem. He believes that "iWatch" and an Apple ring might eliminate the need to carry a smartphone at home.

In General, he expects that the price of Apple’s TV and included accessories will range in price from $ 1,500 to $ 2,500, depending on the number of "mini iTV” devices that the user selects in the kit as well as the size of the TV screen.