« Apple And Samsung’s CEOs Today Will Discuss Patent Dispute
Apple To Ramp Up Production Of 7.85-inch iPad Mini In September » 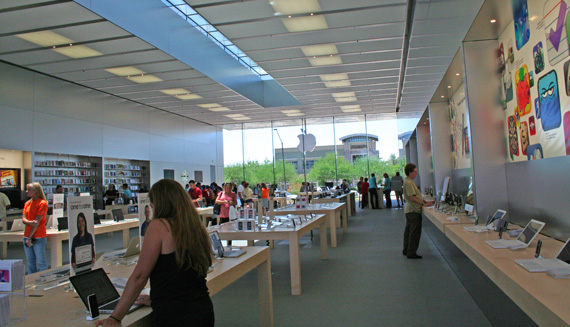 The Loop today some new data on the performance of Apple’s retail chain.

Following the two openings of Canadian retail stores this weekend in and , Apple currently owns 375 stores worldwide, and the company notes that its retail stores have seen about 300 million visitors thus far this year. This means that each store have seen roughly 3500 customers per day. The Loop reports:

"According to Apple, the company has seen almost 300 million worldwide visitors so far in 2012. To give you some type of comparison, by July 2011, the population of the United States was estimated to be 311 million people".

As for the support services, Apple reports that retail store Genius Bars are currently serving 50,000 customers per day, or around 130 users per store per day.

The company has been actively working to meet increasing demand for its retail locations, regularly opening new stores and replacing or expanding some of its smaller outdated stores. Also the company has been seeking ways to increase availability of Genius Bar at its existing locations, placing multitasking demands on its employees several years ago and revamped Genius Bar that would allow to serve more visitors at a time.

« Apple And Samsung’s CEOs Today Will Discuss Patent Dispute
Apple To Ramp Up Production Of 7.85-inch iPad Mini In September »