According to the latest report from, a research firm IDC, Apple’s smartphone market share continues to increase. In the second quarter of 2015, the share reached 14.1%. If to compare this result with the year-ago quarter, we’ll notice a 3.1% growth. The number of smartphone units sold to customers worldwide increased from 35.2 million in Q2 2014 to 47.5 million in the second quarter of this year. That’s definitely a good result, I must admit. 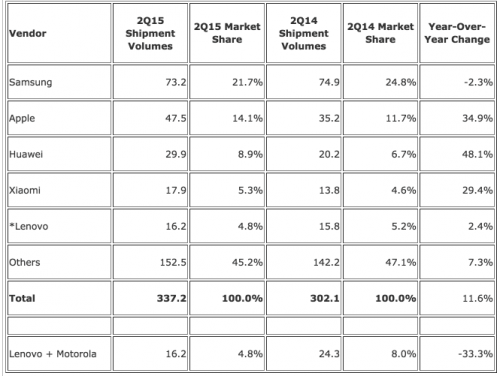 If to speak about other vendors, they also saw an increase in sales and market share. Well, except Samsung. The South Korean tech giant occupied 21.7% of the market with 73.2 million smartphones shipped. Last year, the market share was equal to 24.8% and the number of devices shipped accounted for 74.9 million units.

As you see, the demand for Apple’s iPhones continues to grow. The next-generation iPhone called presumably the iPhone 6s, which is expected to be released this fall, may help the company from Cupertino to break a new sales record.