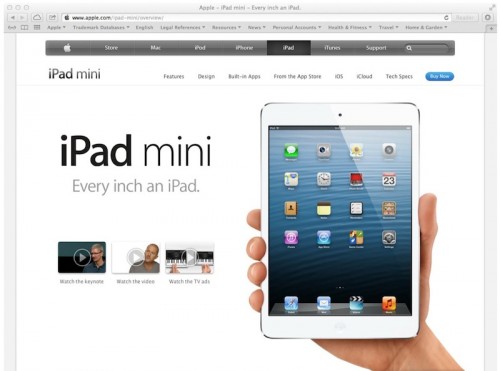 Patently Apple over the weekend that Apple's trademark application for the "iPad mini" term was refused by the U.S. Patent and Trademark Office, but The Verge Nilay Patel noted that the refusal was just a first office action.

The examiner’s major objection to the application is that the term is descriptive and doesn't create a unique trade mark that should be protected. The examiner said that all parts of the term ( namely, "i", "Pad", and "mini" elements) are not unique to this product.

The examiner suggested that Apple could argue for uniqueness by stating that its existing trademark "iPad" has become distinctive. He also noted that Apple should add a disclaimer saying that the company is only attempting to apply for a trademark on "mini" used as part of the entire term "iPad mini” and permit other companies to use the descriptive word "mini" for their products.

A secondary objection to the application is that the "Buy Now" button and the "iPad mini" text shown on a submitted specimen are not close enough to each other.

“The mark and picture of the goods on the specimen are not sufficiently proximate to the “buy now” tab, and it is thus unclear what consumers would be purchasing by clicking on this tab”.