Additional proofs of Apple’s plans to bring a new system-wide Dark Mode to iPhones, iPads and iPod touch units have been recently found in the first beta of iOS 10. A developer named Andrew Wiik managed to turn on the rumored mode for the Settings app on his iPhone running the latest firmware version.

Below you can take a look at the screenshots showing how the Dark Mode on iOS may look like. 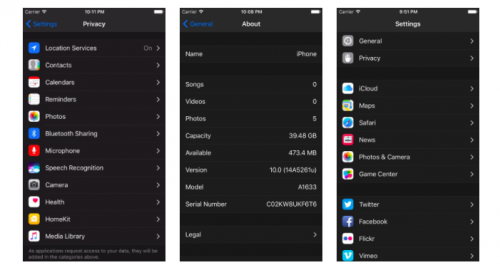 In tvOS, you enable the new Dark Mode using the UISystemwideUserInterfaceStyle preference key and Wiik believes this is likely the way in it will be enable in iOS as well.

Last week, Andrew Wiik managed to enable the Dark Mode for the Messages app. Moreover, the developer also shared the picture showing a cellular data toggle in the Control Center, so I guess we can believe the images we see above.

Apple has released iOS 10 beta with a number of improvements to registered developers last week. In July, the company plans to release a public beta for all those who can’t wait till the release of the software in the fall.