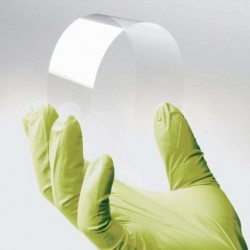 Earlier this month The New York Times said that Apple is working on a smart watch with curved display that could make use of Corning’s flexible . Today that Corning believes it will likely take at least three years before devices with bendable Willow Glass displays can hit the market.

“People are not accustomed to glass you roll up,” [Corning Glass president James] Clappin said after an event marking the opening an $800 million factory for liquid-crystal-display glass. “The ability of people to take it and use it to make a product is limited.”

The Corning, New York-based company is producing the glass and making “a lot of effort” to teach “very big name” customers how to handle the spools, Clappin said, declining to elaborate. The introduction of the glass comes as companies including Google Inc. consider making wearable computing devices.

Clappin said that Willow Glass might be used in some simple products such as flexible barriers for solar panels as soon as later this year. He declined to comment on whether his company had any contact with Apple about its rumored smart watch project.